With more land being safeguarded for neighbourhood parks, more park connectors and cycling routes, and with Downtown East being upgraded, Pasir Ris will retain its identity as one of the greenest townships, with varied recreational and leisure spaces to complement the valuable new jobs being created at nearby industrial estates.

How towns are planned

Our towns are planned with a comprehensive range of facilities to meet the needs of current and future residents. These include housing, shops, schools, libraries, sports facilities, community clubs and parks – all important in ensuring a liveable, self-sufficient town.

The facilities are carefully distributed across each town to ensure good accessibility, supported by an efficient transport network.

Most towns also have commercial nodes and other employment centres such as industrial estates and business parks within the town or nearby, to provide job opportunities close to homes. These facilities and employment centres will be developed according to demand.. 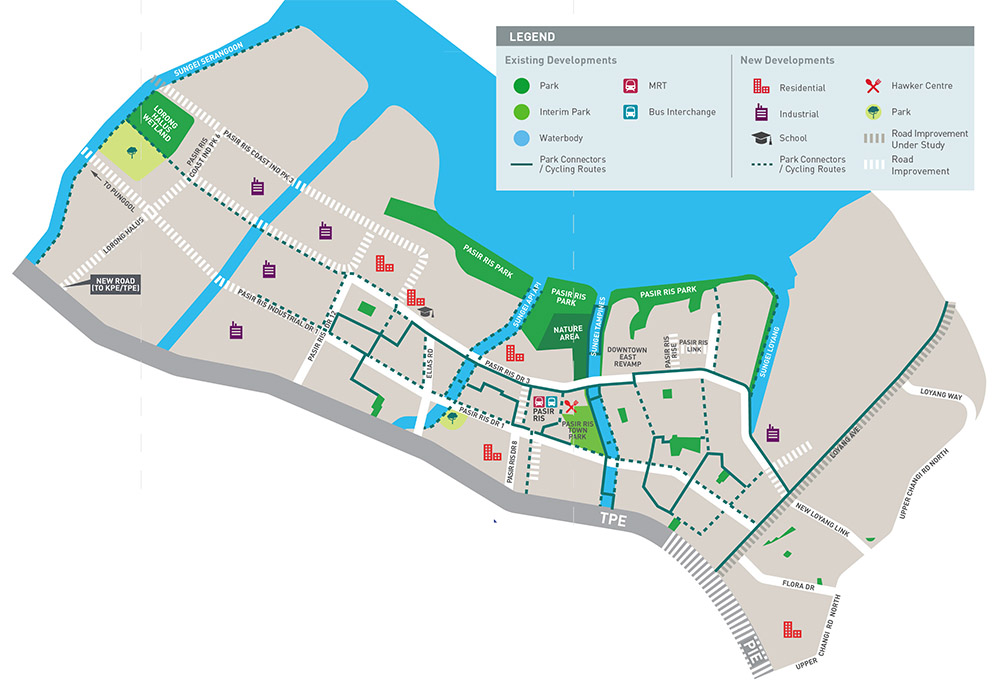 Pasir Ris has developed into a desirable town to live in. To serve existing and new residents in Pasir Ris, more facilities will be added and existing amenities upgraded to continue to ensure a good living environment in Pasir Ris

Leisure: New reasons to be outdoors

Pasir Ris’ appeal comes in part from the many parks and waterbodies that are within easy reach of the residents, such as Pasir Ris Park, Pasir Ris Beach, Pasir Ris Town Park, the nature area next to Sungei Tampines and Lorong Halus Wetland. Several initiatives will be implemented in the coming years to bring most homes in Pasir Ris within 400m of parks or park connectors, namely:

Other developments that will further support and promote outdoor activities include

Travelling within Pasir Ris and to other parts of Singapore will be faster and more convenient with the following enhancements to the roads and public transport services, including:

Working near home will be a perk available to more Pasir Ris residents when new jobs are created in the area. What residents can expect